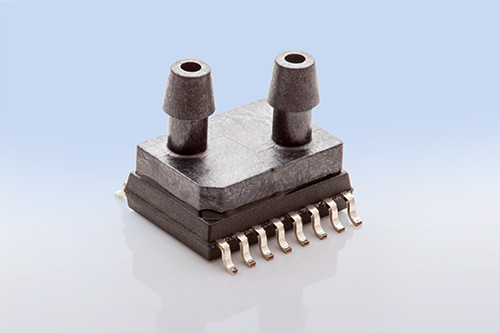 The fully calibrated SM1291/SM1391/SM1491 sensors are supplied in a standard SOIC16 package with two vertical pressure connectors for SMD assembly. Pressure-proportional information in I2C format or as an analog 0.5 – 4.5 V voltage signal acts as an output signal. SM1291/SM1391/SM1491 are autonomous sensors which do not require any additional circuitry.

SM1291/SM1391/SM1491 are suitable for reflow soldering and automatic assembly on a PCB.

The sensor is available in a relative SM1291 or differential SM1391 sensor version or as asymmetrical, bidirectional, differential pressure sensor SM1491.

SM1391 differential pressure ranges:
± 15 psi (the absolute values of P1 and P2 must be identical. Please see the datasheet.)

Link to the pressure converter

AMSYS provides the SOIC sensors in the SM1X91 series as standard versions. The following specifications thereof can be customized, however.

For information on prices and delivery times or if you have any technical questions, please contact info@amsys-sensor.com.

This product is available. Make a request: