Our application notes state precisely how a product can be used for a certain method of measurement, provide soldering information and programming assistance and also explain terms such as system pressure and underside pressurization in relation to a certain product. 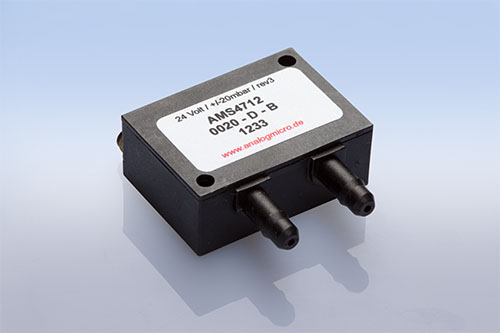 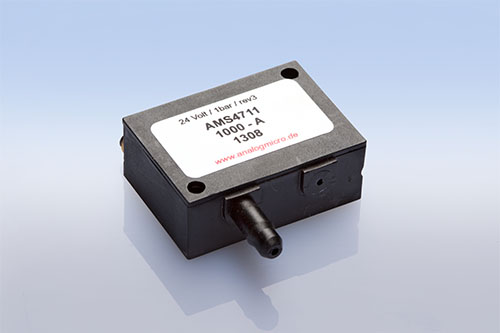 What to know about bidirectional differential pressure sensing

Would you have thought that you can use piezoresistive pressure sensors for one-sided media application with modern materials and underside pressurization? AMSYS explains how the AMS 711 pressure transmitter works – and how much more it can do than simply measure pressure in liquids. (aan515)

Are you looking for reliable signal transmission to cover long distances in environments subject to interference? Although digital transmission has become standard in electronic devices, for example with I²C and SPI protocols, an analog current signal, such as that provided by the AMS 4712 pressure sensor, provides greater signal reliability when transferring information. (aan518)

How can I measure fill levels using a piezoresistive pressure sensor and what should I watch out for here? Find out how you can also measure low fill levels in tanks of liquid with great accuracy using low-pressure sensors such as the AMS 4711. (aan522) 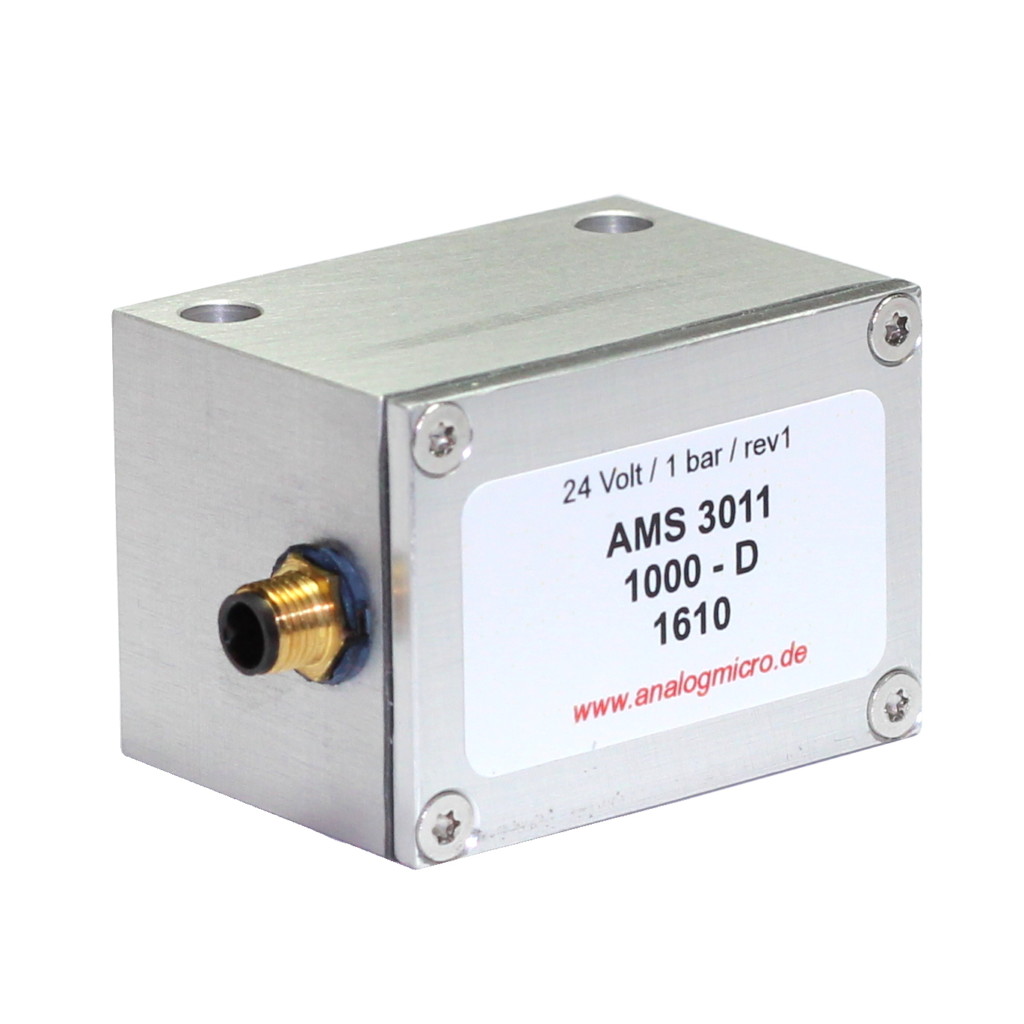 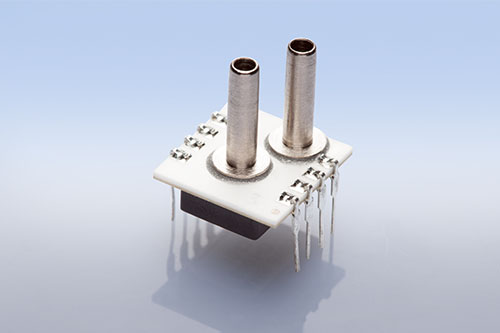 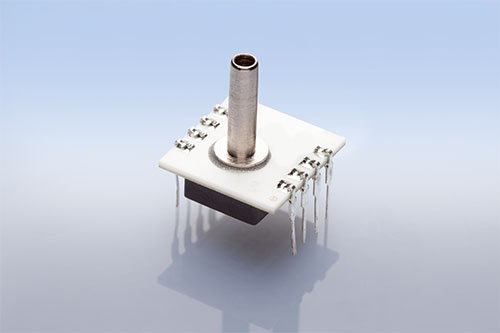 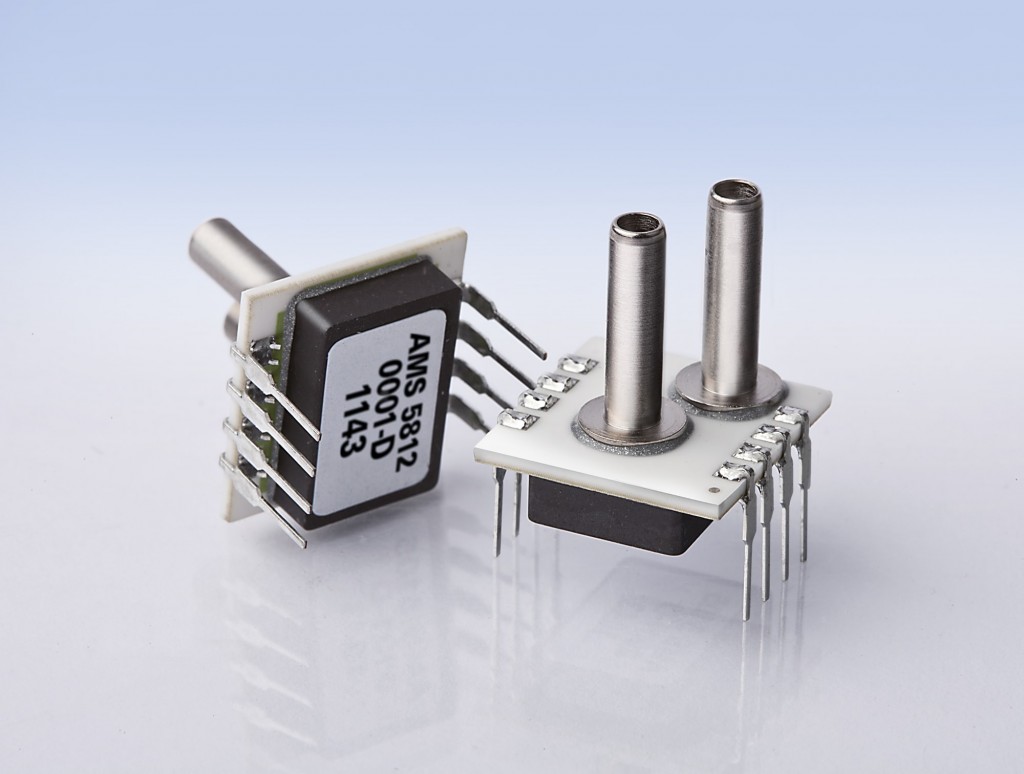 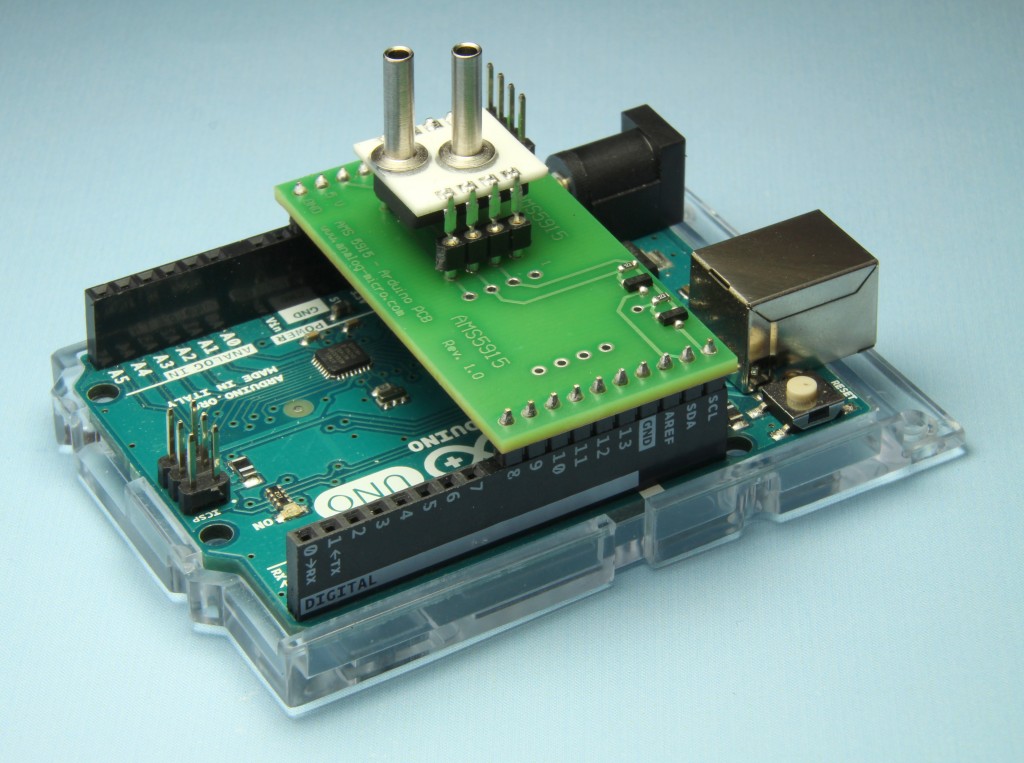 Are you looking for a way of drastically reducing the dreaded media sensitivity of your relative and differential pressure sensors? Taking the AMS 5812 as an example, AMSYS explains how you can better protect pressure sensors with silicon sensing elements against liquids and a number of aggressive media. (aan508)

Pressure sensors with an analog and digital output

Digital signal conditioning is becoming increasingly common in sensor technology. However, there are some sensor system states which can be better displayed by analog values. For reasons of redundancy and system safety it is sometimes of an advantage when a sensor can provide both options. Using pressure sensor AMS 5812 as an example, AMSYS describes this combination of analog and digital output and explains various concrete applications. (aan511)

Are you familiar with the many options provided by pressure measurement recorders (sensors) with a linear and binary output? AMSYS supplies a combination of both and explains its most important features, such as how the piezoresistive pressure sensor AMS 5105 has been implemented with an analog, a linear and two binary outputs and which benefits this combination has for the user. (aan513)

Monitoring filters and ventilation systems with a double-function sensor

In a ratiometric system of measurement the reference voltage increases linearly to the supply voltage. AMSYS explains precisely how this works with the example of the AMS 5812, a pressure sensor which has both a digital and a ratiometric, analog output. (aan521)

This article explains how data can be read out from a pressure sensor and immediately further processed with the help of the Arduino minicomputer. An Arduino IDE library is also available for reading out pressure and temperature data from the AMS 5915. (an1101)

Under accessory AMSYS provides demonstration, sample and Arduino boards and development and starter kits which facilitate the initial operation of and data readout from the sensor. 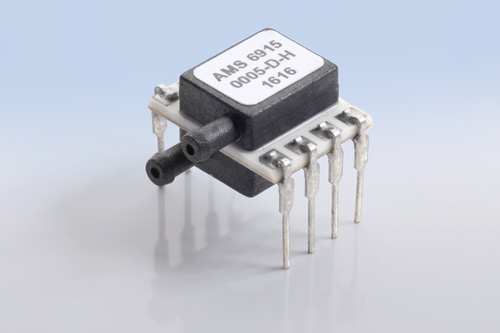 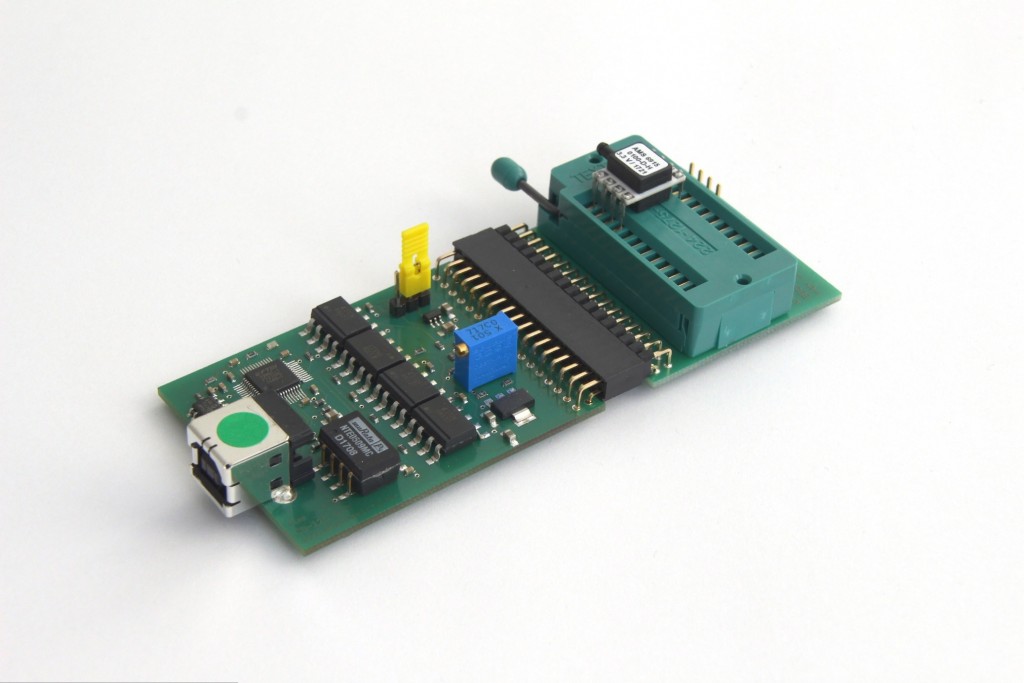 AMS 6915 is a miniaturized, OEM pressure sensor in a dual inline package which enables pressure and temperature to be measured in 3 V or 5 V operation in I²C format. A multifunctional USB interface is available for this sensor; the AMS 6915 starter kit. This can drastically reduce the prototype time. The sensor’s measurement values can be read out, displayed and stored and individual addressing is possible through the starter kit. (aan525)

Under accessory AMSYS provides demonstration, sample and Arduino boards and development and starter kits which facilitate the initial operation of and data readout from the sensor. 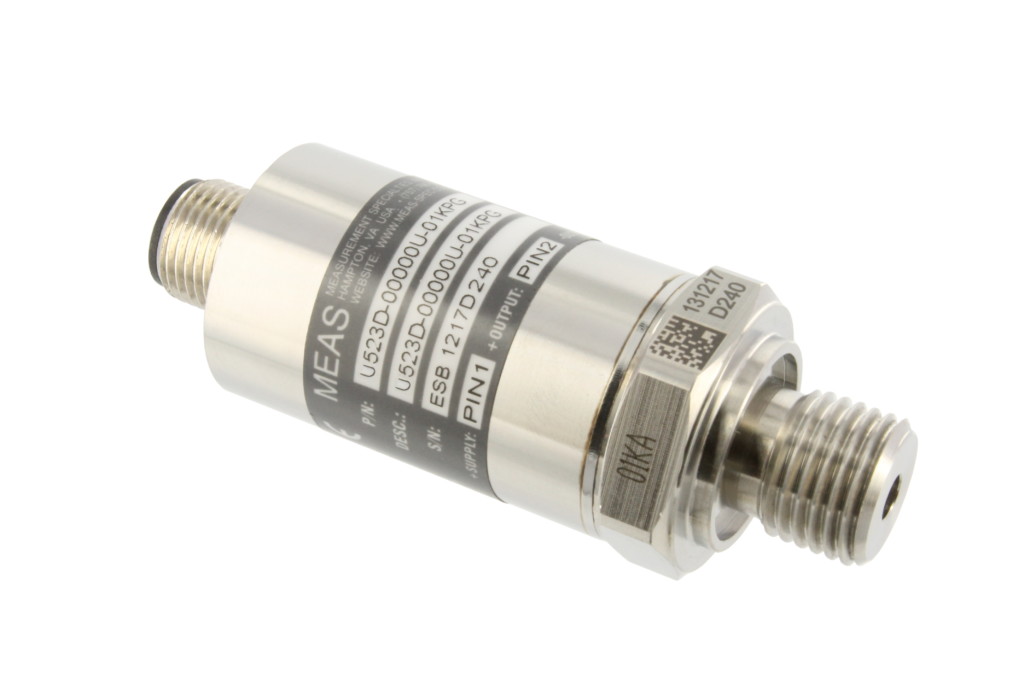 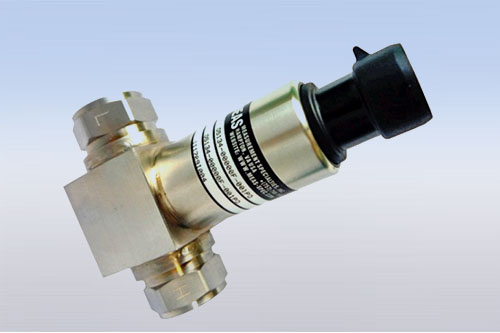 The pressure system environment is sometimes too aggressive for a silicon sensing element. In cases such as these a media-resistant sensor is called for. AMSYS describes the design and features of a pressure transmitter with a sensing element encapsulated in stainless steel specifically for hydraulic applications, taking the U5200 as an example. (aan519) 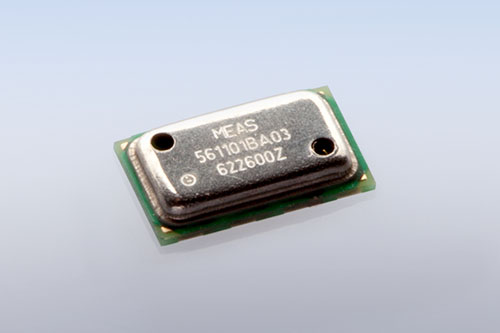 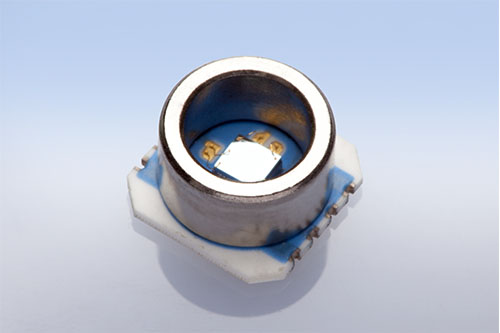 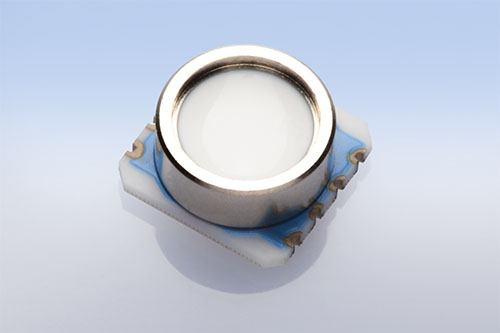 Altitude can be measured using many different physical methods. The functional correlation between atmospheric pressure and height permits altitude to be accurately measured using the barometric formula and a pressure sensor. With its miniaturized, calibrated, silicon-based absolute pressure sensor MS5611, which has a vertical resolution of 10 cm, AMSYS makes use of the barometric formula for this specific purpose. (aan509)

Besides acting as an altimeter an absolute pressure sensor like the MS5534, calibrated for the barometric pressure range, can also be applied as a barometer. The appropriate pressure sensor measures the change in relative atmospheric pressure and can thus be used to forecast the weather. (an1501)

Minimum and maximum values for MS5534

The sensor’s digital measurements can be converted into pressures with the help of this table. (an1517)

Absolute pressure and barometric sensors such as the MS5540 can not only measure altitude but also depth which is often necessary when diving. These application notes explain how the sensor can use the water pressure to compute the depth of the water with an accuracy of 5cm. (an1515)

These application notes contain example C/C++ source codes for the MS55XX series for communication with a microcontroller through an I2C interface. (an1502)

These application notes describe communication between a microcontroller and pressure sensor modules MS56XX, MS57XX and MS58XX using SPI and I2C protocols. With these example codes we explain microcontroller initialization and the command structure and how pressure and temperature are computed with the help of the obtained data. (an1520)

These application notes explain how the sensor’s power consumption can be reduced using certain settings other than the standard configuration for the pressure sensors in the MS45X5, 85BSD, 86BSD and 154BSD series. (an1801)

These application notes outline communication between MS45X5, 86BSD and 154BSD sensors and explain how the I2C/SPI protocol is generated. (an1802)

These application notes explain what must be taken into account when soldering in order that the final system complies with the European RoHS directive. (an1808)

These application notes define the basic principles for communication with the sensor through an I2C/SPI. (an1701)

Digital data exchange with an SMI demonstrator board

These application notes detail how the sensor can be easily operated through a demonstrator board, how temperature can be read out and how an EEPROM can be programmed. (an1702)

Processing note: Mounting of SOIC sensors from SMI according to RoHS

This application note explains what needs to be considered when mounting SOIC sensors. (An1703) 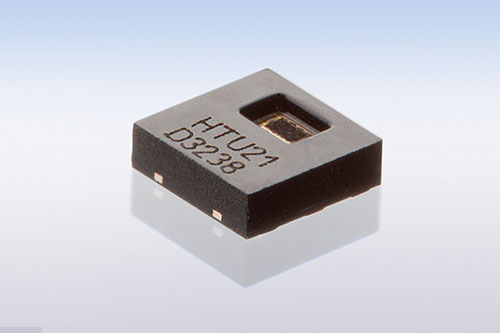 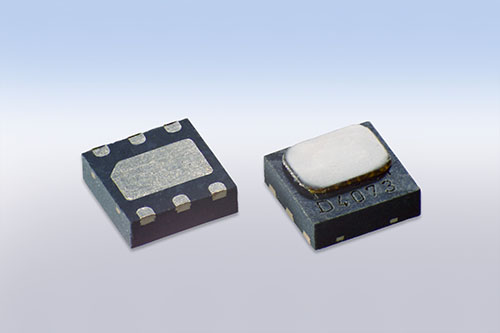 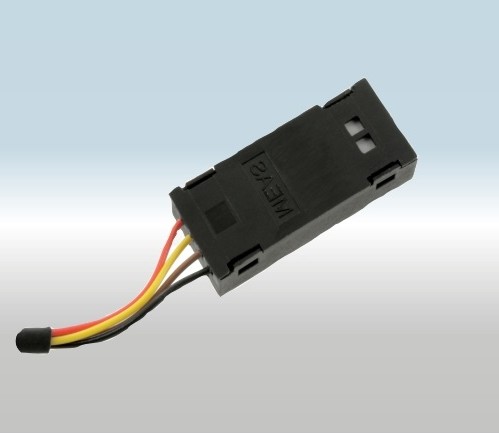 The HTU2X provides a device-specific serial number which can be read out through the serial interface (I2C). It enables each individual device to be clearly identified. These application notes describe the serial number read-out procedure. (fan001)

The HTU2XD driver has been developed to provide easy access to the sensor through four general functions. The driver returns values for humidity, temperature and serial number and enables the device software to be reset. The driver was originally written for the Microchip dsPIC33 family of microcontrollers but can be easily ported to any other platform by modifying the hrd_i2c files. We would be happy to send you the ZIP file on request. (fan002)

The advance of automation technology means that humidity is becoming ever more important as a measurable variable. Humidity sensors can now be mass produced at little cost. This article describes miniaturized humidity sensors such as these and their typical applications, taking the HTU21X series as an example. (fan004)

Using miniaturized sensors and modern microprocessors, nowadays building powerful measurement systems is relatively simple. This is illustrated for humidity and temperature in this article with demonstration board D1HTU21D. (fan005)

Humidity sensors are mass produced for industrial use. The following application notes take into account the fact that the majority of the above have CMOS components and digital output signals; however, analog, interference-proof signals are still required in the automation industry, for instance. AMSYS describes a suitable analog two-wire (current loop) circuit in combination with a humidity sensor herein. (fan007) 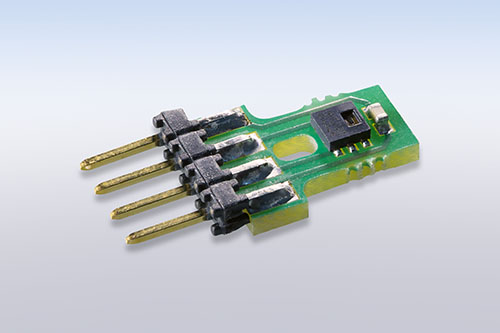 This product description describes the PHTU21D which has been designed to enable easy manual assembly of HTU21-D sensors (DFN package) for prototypes and small batch production. The PHTU21D consists of a printed circuit board with a four-pole pin connector, the HTU21D and a decoupling capacitor. (fan003) 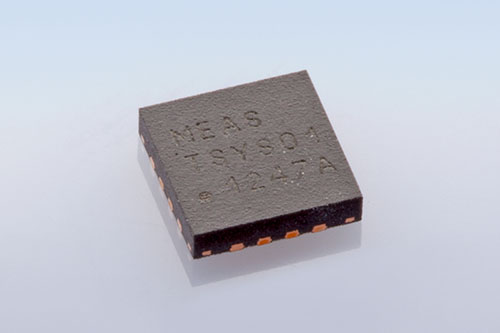 Example programming for the TYSYS01

These application notes use an example application to explain how communication with the sensor works through an I2C or SPI. (an1601) 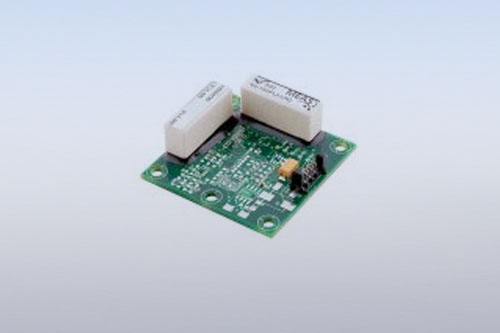 Spirit levels have always been an essential elementary tool for any good, self-respecting workman. They are simple and efficient. This article describes how this successful principle has been migrated to our microelectronic day and age and how electronic spirit levels can be used as inclinometers. (aan514)

For information on prices and delivery times or if you have any technical questions, please contact info@amsys-sensor.com. 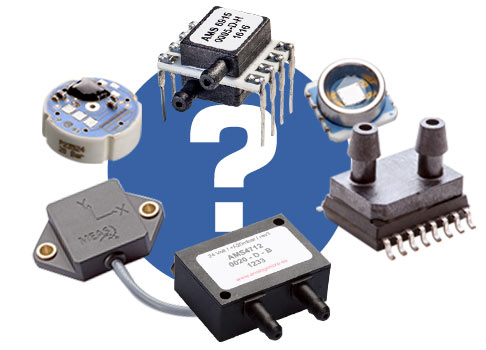 Use our sensor search and find the right pressure sensor.